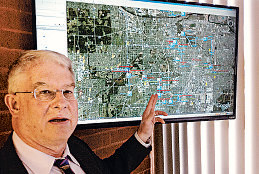 Intended to offer high-speed Internet access to municipal governments, schools and businesses in the south suburbs, the fiber optic network also presents a potential economic development tool for the region.

While it’s not something residential customers can tap into, the network could provide a boost in communities where high-speed broadband isn’t readily available or is financially out of the reach of businesses.

That void was putting parts of the region at a disadvantage in wooing new business to the area, Ed Urban, president and chief executive of Urban Communications, said. His Oak Forest company, where the network data center is located, was hired to operate the network by a nonprofit that was created by
the South Suburban Mayors and Managers Association to oversee it.

So far, Monee, Governors State University, South Suburban College, the Tinley Park Convention Center, Oak Forest Hospital and the Markham courthouse are using the network, but many other area communities, schools and businesses have expressed interest, according to Urban and Ed Paesel, executive director of the mayors group.

Work on the network, which comprises about 70 miles of fiber optic cable, began in 2012, and GSU was the first to go live in February of this year.

Funded in part with$6.1 million in state grant money, the network grew out of a 2009 study by Paesel’s group and Northern Illinois University that  found disparities in access to high-speed Internet. Suburbs clustered near Interstate 57 were “particularly underserved,” Paesel said. Depending on the community, high-speed broadband “either wasn’t available or it was very expensive,” he said.

From an economic development standpoint, broadband service “is as important a part of infrastructure as water, sewer and roads,” Paesel said.

Urban’s company recently had 150 people attend a formal unveiling of the network and tours of the data center where traffic on it is managed. It was also an opportunity to sell other potential users on the network’s benefits, and Paesel,who is vice chairman of the network’s board of directors, said “a lot of one-on-one meetings” are planned with community officials, schools and business owners.

He said an “old-fashioned marketing campaign” is underway to pitch to potential customers, but Urban said the plan isn’t to sign up a bunch of customers in a short period of time.

“We wanted to do this in a controlled rollout” so as not to bite off more than they could chew and wind up having delays in connecting them to the network,
he said.

The Tinley Park Convention Center is in the implementation phase of a one-gigabit connection to the new network, which will enhance broadband services, said Daniel Fitzgerald, director of sales and marketing for the center and adjacent Holiday Inn.

Urban said his company spent $3 million on its own to convert space in its building for the network’s data center, using a combination of available cash and
bank loans. He said he hopes the money will be recouped from revenues generated as more network customers come online.

He punches in a code and places his hand on a biometric palm scanner to get into the room, and once inside points out safeguards meant to ensure the expensive equipment keeps running no matter what. Fire sensors under the floor and above the ceiling are tied to a suppression system that would fill the room
with an inert gas, rather than water, to snuff the flames.

Two ComEd power lines — each coming into the building from a different direction should a power outage affect one of them— feed into an array of batteries that supply a steady flow of 480 volts to the computer equipment, avoiding possible dips or surges in current. Should both power lines fail, a natural gas generator would take over, and Urban said a second generator will be installed.“It’s a long-term investment. I view it as an investment in the community,”
Urban said.