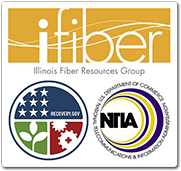 A wireless contractor has been selected for the project designed to bring a reliable high-speed broadband network to a nine-county region in northwest Illinois.

The new network will provide a combination of dark fiber and wireless infrastructure that supports up to 10 Gbps, making possible efficiencies in service, enhanced economic development and remote off-site storage capabilities. The use of carrier grade wireless microwave technology will allow connection speeds between 100 Mbps and 1 Gbps to more users than can be cost-effectively reached through a direct fiber connection on the 900-mile fiber optic network backbone.

Urban Communications was selected because it is uniquely qualified to provide the wireless portion of the network, according to John Lewis, chairman of the iFiber board.

“We are pleased to add Urban Communications to our team of contractors to help us complete the iFiber project by the summer of 2013. While the mild winter weather has allowed our fiber construction crews to stay ahead of schedule, this is an important component for completion of the project.” said Lewis.

Edmund G. Urban III, President/CEO of Urban Communications, said “We are very excited that we have been selected by iFiber to play such a significant role in this major network bring broadband to rural Illinois.

“Adding microwave wireless to the dark fiber is an integral part of completing this robust broadband project. Working together, this is how we capitalize on President Obama’s goal to make high-speed broadband available throughout the U.S., to keep America competitive in the world market,” Urban added.

Urban Communications is the oldest and most robust fixed wireless broadband internet company in the Chicago metro area. It has been the premier high-speed broadband wireless access provider in the Chicago area since 1997, serving government agencies, school districts, public colleges, enterprise businesses and small businesses.

“We provide a 100% diverse metro ethernet network using licensed carrier grade microwave radios linking all of our towers. Our customers rely on us for the best service and reliability. We also design, build and manage private microwave networks for government and educational institutions throughout other areas of Illinois and across the country,” said Urban.

Design engineering and permitting for the iFiber project are being coordinated by Baxter & Woodman (DeKalb, IL). Construction of the fiber portion of the network is being completed by PirTano Construction Company (Addison, IL) in Carroll, JoDaviess, Lee and Whiteside counties; and Aldridge Electric (Libertyville, IL), which partnered with Kelso-Burnett (Rockford, IL), in Boone, LaSalle, Ogle, Stephenson and Winnebago counties.

In September 2010, Northern Illinois University as the fiscal agent, received a $68.5 million National Telecommunications and Information Administration Broadband Technology Opportunity Program grant to deploy an almost 900-mile network across the northwest Illinois region. iFiber was established as a not-for-profit entity in January 2011, to address current and future high-speed Internet needs of communities across northwest Illinois.